AGS organized charity  activity "All towards the eye of the hurrican" at Ninh Hoa District, Khanh Hoa Province on November 15th

Typhoon Damrey – the storm no.12 made landfall at 6 am on 4 November in Khanh Hoa and Phu Yen, with winds level 12, speed over 100 km/h. Heavy rain and high winds uprooted trees on the streets. A lot of electric poles were knocked down by this storm, which caused widespread blackouts and the interruption of Internet. This storm has been an obsession for the people in Khanh Hoa province, where is more than 20 years without typhoon.

The storm no.12 hovered Ninh Hoa district from 4 am to 8.30 am on November 11th, which brought the heavy consequences. According to the statistics up to 2 pm on the same day, 5 people were now counted dead, 1 was missing and 5 were injured. Meanwhile, Ninh Diem and Ninh Thuy ward didn’t have the loss of people, yet the storm also caused the huge consequences, a lot of houses were completely destroyed, over 90% homes unroofed.

With solidarity tradition, the leaves protect tattered ones and the desire to share a part of the damages and losses with the victims of the storm, Aviation Ground Services Company Limited (AGS) had mobilized charity activity to all employees in order to support the persons in typhoon-hit areas overcoming the difficulties.

Through research, the damage situation of Ninh Hoa district, the representatives of the Executive Committee of trade union and AGS' departments performed the charity activity "All towards the eye of the hurricane" at Ninh Thuy ward, Ninh Hoa district where was severely suffered by the storm no.12. The meeting-hall of People’s Committee of Ninh Thuy ward, where took place the charity activity on November 15th. The representative of Aviation Ground Services Company Limited (AGS) had the speech in the meeting. 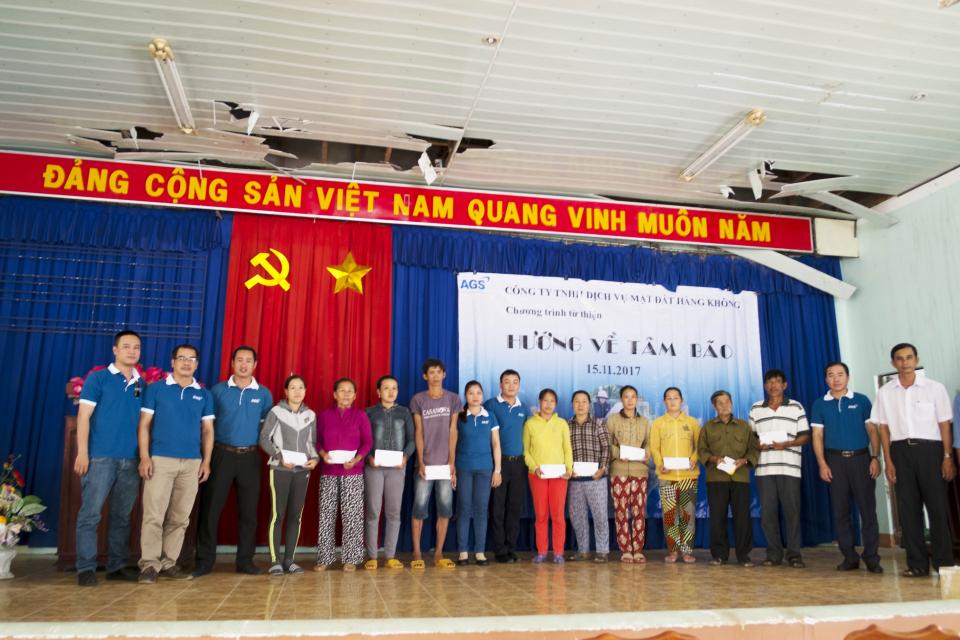 The representative of AGS gave the gift aid to people in Ninh Thuy ward. The house of Mrs. Nguyen Thi Nhe in Ba Ha 2 civil group, Ninh Thuy ward was completely destroyed by the storm no.12. It was quite lucky for her family because of no loss of people The AGS representative paid a compliment and encouraged Mrs. Nhe’s members to overcome the difficulties.

The Vietnamese nation is proud of the tradition “The leaves protect tattered ones” even in the most difficult situation, the spirit of solidarity and support one another are still received the most enthusiastic response from all persons. Although there were had some employees who suffered the losses by the typhoon, AGS team still had been responded and joined in the charity activity " All Towards The Eye Of The Hurrican" positively with the spirit sharing the difficulties with the victims who had more heavy damages. For Ninh Thuy people, these humanitarian gifts from AGS as the honest encouragement that eased their pain,  in addition, hoped they could overcome the losses and difficulties quickly to construct and start the new better life.